I was looking to do a bit of recording when I moved to Victoria and just happened upon Wynn Gogol.  I found a musical brother!  And a fantastically clean funky little place called “One Ton Studios” that Wynn set up.  One Ton refers to the supporting beam that weighs…. Are you ready…. one ton!  At One Ton Studios Pianist Lisa Olive and I recorded our first song together.  The Svd Song, by Michael Greenacre, has gone on to be our greatest hit so far at over 19000 hits on youtube.  Michael Greenacre and I also recorded our second album Below the Surface and the song about renewable energy Water, Wind, Sun and Sea at OneTon Studios with whole bevy pint-sized singers.  That song and video clip is due out this year.  (I’m on the edge of my seat waiting for the Turkish animator to finish her part.)  Thanks to Wynn’s gentle ear and inspiration as a producer,  I’m extremely pleased about a version of I Did a Spell on You, which I’ll share with you as soon as I can.

Wynn has only “done” music his whole life and when I met him were were both writing books.  Wynn’s book is about song-writing about which Wynn and I could talk up a storm.  If it weren’t for wee babes to watch (and my crazay travel schedule), we would never stop talking.  I have been working on drafts of “Deliver Me” about being a living liver donor, “A futile Search For Modern European Plumbing”, and “Wood Storms and Raging Canvass” a coffee table book about my Uncle Godfrey’s Art, to name a few.  I’ve gotten distracted along the way…  Wynn has been producing music and writing about the process of writing song!

Not that it was a contest in any way, I’m writing to you today to let the world know that Wynn has beat me to press! 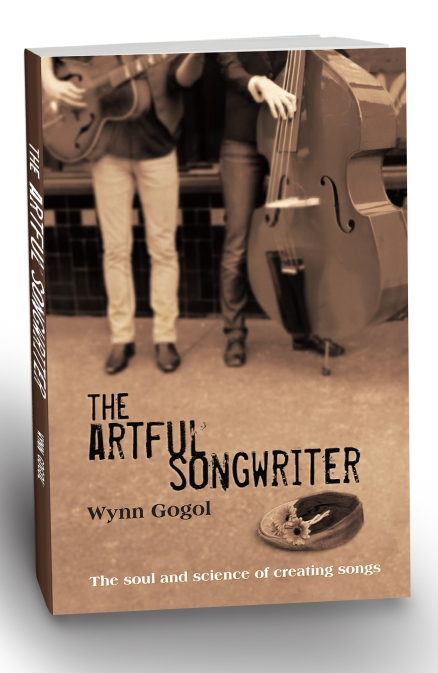 He’s done his book!  The Artful Songwriter: The Soul and Science of Creating Songs

I told him that I had to post about this momentous occasion.  His book launch party will take place at Hermann’s Jazz Club in downtown Victoria this coming Thursday the 25th of September.  I won’t be there but I wanted to lend him my full support, love and big-up respek via the da blog.  Wynn will be playing with the Back Dirt Road Band (he plays a whole slew of instruments and sings too).  Doors open at 6.30 and books will be on sale.

An excellent musician and with a killer ear, Wynn’s eloquent both musically and lyrically. (He’s also got a green thumb.)  You’ll  want to hear him play and speak.  And you’ll
want to read his book if you’d ever wondered about the soul science of song-writing.