“Things do not happen. Things are made to happen.”
– JFK

I passionately encourage everyone everywhere to march tomorrow in the world’s second March Against Monsanto.  It’s being held in every major city in the world on October 12th.

Here is Dr Vandana Shiva explaining why we should March.

Although Monsanto is perhaps the least ethical of the corporations, they are not the only ones legally hijacking our food supply.  6 companies are in control here: Dow, Sygenta, Dupont, Bayer Crop Science, Basf  are just as culpable.  Between them, they control the global seed, pesticide and agricultural biotechnology markets.  This is not science fiction.  This is not a conspiracy theory.

This should have violated every anti-trust piece of legislation known to the courts.   Like monocrop agriculture is wrong, so are a handful of companies consolidating the food chain.   They say they are feeding the world.  Owning and poisoning the food supply doesn’t equate to feeding the world.  GMOs are not proven safe for human consumption.   They were released into our food supply after 3 month long rat studies.  Rats live 2 years!  The theory is that they use fewer pesticides.  The reality is that they use more pesticides than before.  The theory is that they give more nutrition.  The reality is that these are all just dreams and not one nutritionally enhanced food is commercially available.  As people wake up to this reality, they are outraged. 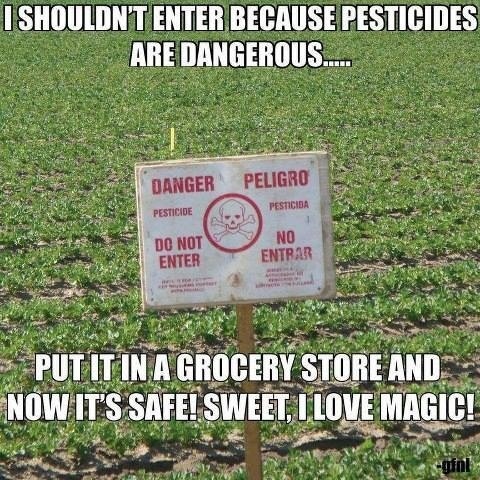 March for our Food.

March for the Bees who are beeing destroyed by neonicontinoid pesticides.  (Neonicotinoids are a common coating on GMO seeds)

March for justice for the 284 000 Farmers in India who have been driven to suicide.

March for the system of farming that works: ORGANIC.  In side by side comparison studies Organic yields equal GMO yields over the long run.  In times of drought, Organic yields are greater than GMOs.  Without poisoning the Earth.

I’m leaving you with this image: Monarch butterflies flutter, Bees Buzz, Insects abound, Our rivers run clean.  Air is pure.  This all is possible if we grow organically. Listen to the Earth.  Respect her creatures.  Respect each other.   As Grandpa Rupert said,

“Always Leave the soil better than when you found it.”