Eloquence is the poetry of prose.

First of all, I was inspired by a quote from Robyn O’Brien. The gestalt was “Keep speaking, even when you’re trembling.”  I was trembling.

This post has been more widely shared than most of my recent posts on the Deeper Side.  A comment on Facebook just came up that made me realize that I need to expand this post with more background information to help more readers understand. So if you are familiar about the subject, please skip the rest of this paragraph.  For some background on the terminology: GE = Genetic Engineering = GMOS.  Not talking about an extension of traditional plant breeding. I’m talking about Canadian food crops that have been modified to withstand herbicides (like glyphosate) or express a pesticide (like BT). Many GMOS have both traits. Talking about food crops that are not modified for higher yield or better nutrition. No governments have done their own safety studies. GMOs contaminate non GMOs. And Canadian law favours the patent holders of the GE seeds over the farmers who have had their crops contaminated. For some background, I recommend the 2013 documentary ‘GMO OMG’. Another great resource is GMO Myths and Truths you can find online.

Now for the specifics of the Motion put forth by Councillors Ben Isitt and Jeremy Loveday,  There is a bunch of Wheras’s.  If you want you can look up the motion or write back at me and I’ll include them all. Generally given the lack of long-term studies both for human safety and on ecology, and following the precautionary principle the “ask ” was that the City of Victoria go on record to oppose this new technology until the requisite studies are done.  Specifically to quote from the motion:

“BE IT FURTHER RESOLVED that the City call upon the Federal and Provincial governments to implement a regime of mandatory labelling of all genetically modified organisms (GMOs) for sale in BC and Canada.

“BE IT FURTHER RESOLVED that the City call upon the Federal and Provincial governments to impose a moratorium on bringing further GMOs to market for sale until a regime of independent and transparent scientific assessment and GMO management is introduced.

“BE IT FURTHER RESOLVED that the City of Victoria shall forward copies of this resolution to the Premier, Prime Minister, all local MLAs and MPs, Federation of Canadian Municipalities (FCM) and The Union of B.C. Municipalities (UBCM).”

Let me give you a play by play account of how tonight’s Victoria Council Session went.

I came into a mostly empty council chambers as a virtuoso pianist was serenading the room from about 6 – 6:30.  Robert Holliston.  Beautiful playing.  Set the tone? I was not expecting that – it was kind of surreal.  Actually, it was almost mystical.

I met Tony for the first time.  Love his sign and his smile.

Then Mayor Helps and councillors came in.  I need to give props, snaps, shout-outs to Councillors Ben Isitt and Jeremey Loveday for their commitment to this important cause.

Mayor Lisa Helps (in what looked like a locally-made smoking lily dress oh ye followers of the Style-Diet) called the session precisely at 6:30 and after a few words, I was the first speaker for GE Free Victoria.  Read from my notes.  Held by my trembling hands.  Heard my voice quake and shake. But hung in there.  You can probably guess what I talked about.

Second up was Jim Jordan, a seeker of social and environmental justice.  A soft-spoken man, an organized thinker and most importantly: a do-er.  The steady driving force behind tonight.  Jim spoke about seeds and how the machines and chemicals of war were repurposed to agriculture. Jim provided the council with a speech and presentation by Dr Thierry Vrain, former GMO scientist and current organic farmer.  Dr Vrain summarized recently findings about the biocide/herbicide glyphosate.

Third up was Arzeena Hamir, an agrologist and organic farmer of Amara Farm up in Courtney.  An excellent speaker (a fabulous soul too), she focused on how Richmond benefitted from a GE Free Resolution. 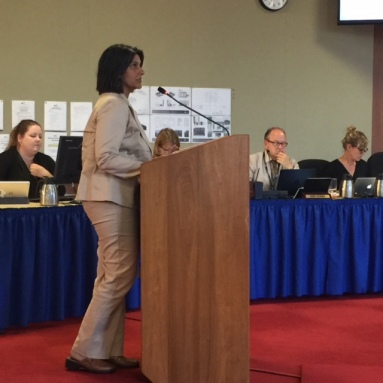 Next was Tony Beck, a PhD from London and a UN Advisor on food security and gender issues.  Eloquent, beyond knowledgeable.  I wish I had taken notes!  What I recall was how municipalities need to take the charge and how 50% of seeds lies with only a handful of companies.

Afterwards, Rob Pearce, virtuoso drummer and therapist spoke clearly about the dubious and unethical practises of certain biotech patent holders.  Like me he is more of a musician than a public speaker.  But he was wonderful, informative. He went out of his comfort zone.  Respect.

Dr Joan Russow, erstwhile leader of the Green Party delved into the history of the international struggle against this questionable technology.  Even since I first met Joan, I have been totally bowled away by her energy and focus.  Gratitude for her voice.

Frances Litman, sparkling, a great speaker and 2012 CRD EcoStar Community Leadership Award Winner on behalf of Creatively United For The Planet, read two statements.  One from the conscious dietician Rachel Dickens and another from Dionne Laslo-Baker from DeeBee’s organic tea pops.

It didn’t stop there.  No folks.  Three more speakers followed.

First of the trinity was Michael Coon who has been railing against GMOs in Hawaii (ground zero for GMOs).  He’s a powerful speaker and focused his talk on the findings of Steven Druker in the book “Altered Genes, Twisted Truth.”  Wonderful and terrible at the same time. But the eloquence….

Next was Professor Emeritus Edwin Daniel.  In his 9th decade, he was clear as a bell. And he hit home that there is no independent, long-term studies showing the safety of GMOs.

To round out was sharp Dr Judy Gaylord.  She was commanding, delivered one truth after the other.  Such impressiveness.

I was honoured to be there, to be a part of it.  I wanted to take a group photo but we all dispersed at different times.  None of us understood when the motion would be voted on and all thought it would be weeks, not minutes. So I left.  On the way out I got a quick pic with Arzeena and Tony. (Thanks to the dude in uniform at the door for snapping) 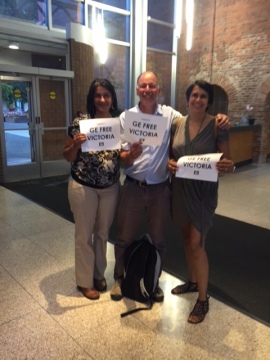 The light outside was good so I finagled a selfie for fun (uncle Godfrey first pointed out this excellent sculpture of Sir John A. Macdonald a couple years ago.)  I like to think of John A holding up the sign! 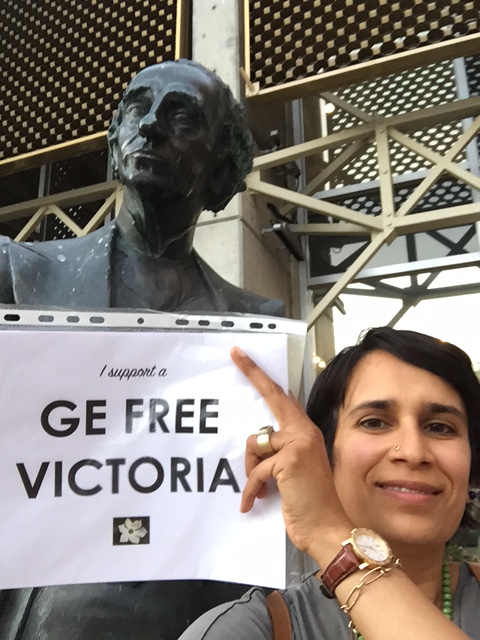 I left feeling light, thinking that we’d hear something maybe in a week or two or at the next council session.

BUT THEN, Francis texted me!  It passed.  Unanimously.  Jim called to confirm the news!

This is why Im writing this post now.  In jubilation and exaltation!  Need to share with you all.  Ye who are curious.  Ye who want to know what a council meeting in Victoria looks like.  Ye who may want to bring a motion to your own City Council!

A little history was made.  In a small provincial capital.  But an important one.  My home since 2009.  This GE Free Resolution is a first for Victoria – and a first for me too.  (Did you know that this was the first time I spoke at at council session?!)

I guess that thinking globally but acting locally has made some kind change.  Today.

Courage is contagious.  Infect others.