People who want to help support Washington’s Labelling campaign… I have good news!

From anywhere in the world even in Canada.  I’m not talking financially (although that would be appreciated go to yeson522.com so that they can fund their ads). I’m talking with your time and your wonderful God-Given Gift of the Gab!  That handful of big multinational corporations are spreading lies and waging a deceitful campaign just like they did last year in California.  In Washington however, many of these corporate donors tried to hide their identity.  They were slapped by a lawsuit by none other than Washington State’s Attorney General to get them to comply with campaign rules.

Those monster multinational corporations who oppose the measure say that “labelling is incomplete”.  That it’s not useful given that over half the food sold wouldn’t be covered.  Don’t be fooled by them – they would oppose labelling on any grounds.  The group said it is their number one priority to defeat labelling. They argue that incomplete labelling wouldn’t cover most GE foods, such as restaurants, food service.  Since when is your home delivery pizza labelled? Even in Europe food service isn’t labelled?!  522 affects the  labelling of people food you buy in a grocery store.  Close to 70 percent of the world’s population lives in a nation that requires labelling of GMOs.

Canada and the US are the only two developed countries that don’t have mandatory GMO labelling.  Can you think of anything more important than knowing what you put in the sacred temple of your body?

The ballots are out.  Washington State votes by mail.  Nov 5th is the deadline.  I’ve done phone banking several times over the last week.  It’s simple, and it doesn’t cost a cent for the phone call because the computer calls you!  Here are some happy volunteers clarifying the truth to Washingtonians last week at Nature’s Path! 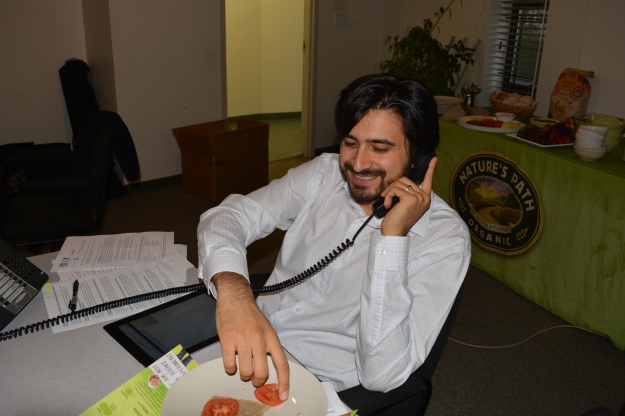 My Brother Arjan working though dinner (Non-GMO of course).

Kyla a-phone banking with a smile.

My Dad Arran and Erika in deep concentration.

Remind your Washington friends and family to Vote.  Let’s show those corporate bullies who are covering up the truth about their food.  These bullies and their deep pockets are the only thing coming between you and your right to know.  Let’s show them that their money should have gone to useful, constructive things like feeding the hungry and designing safer food.  Can you believe that they have no higher priority than preventing consumers from finding out the truth?

350, 000 Washingtonians signed the petition that brought this to ballot.   With thousands of endorsements, and thousands of contributors Yes on 522 has the backing of the people.  The question is, will the No side convince enough people who want labelling that the bill (designed along International Standards) is incomplete?  The outcome is going to be too close to call.  Next week, a local Seattle TV station has a pro GMO fairytale to tell.  If there is a time get involved, this is it.  Get involved on any and every level.  Dispel the darkness – Spread the glowing truth!

All you need is a phone and computer!  To get trained go to http://yeson522.com/volunteer-for-yes-on-522/

The deadline is Nov 5th so we have a week left to make history!