Here is a photo of Grandpa Rupert, just a teen, who enlisted to fight in WWI.  (Check out the KILT! ) I was told that he exaggerated his age to join up to fight for King and Country, eager lad that he was. He came back from Europe a broken man.  He barely survived the trenches of WWI, along with only a handful of soldiers from his regiment.  He never spoke about the war, except to say that “war is a terrible thing”.  Returning to Vancouver Island, Grandpa Rupert healed his wounds tilling the soil, growing berries.  I’ve discovered that more and more war veterans are turning to farming every day.

You may recall the post I did on the OTA awards and the young Iraq Vet turned organic farmer who led us in the marine oath to be Semper Fidelis.  With staggeringly high suicide rates and suffering from Post-Traumatic Stress Disorder Syndrome, war veterans kill themselves at a rate of one per day.  That’s a conservative estimate.  And who can blame them; they have seen the worst of mankind, experienced the horrors or war.  Thinking about this yesterday I discovered a new  piece of Grandpa Rupert’s puzzle (he died when I was young).  I had hitherto only thought about him as an organic farmer and songwriter.  Now I think of him as a war veteran who healed himself through the Earth.  His songs of the Earth were inspired by a love of Mother Nature.

Grandpa Rupert farmed organically in the 1950s, when his peers were starting to use chemical inputs.  Grandpa used sawdust as a mulch, seaweed as a fertilizer, and extolled the lowly earthworm.  He always would leave the soil better than he found it.  Here is a link to one his songs I recorded http://www.youtube.com/watch?v=vnRo3kFQEFU.  I remember him this Remembrance Day.  I think of his journey, his redemption through the soil.  Through my own experience with gardening, I know that working the earth in harmony with her creatures heals the spirit and energizes the soul.

Let us all be semper fidelis to each other, to all creation from the earthworm to great ape. Let us wage not war on the earth but peace.  Let us grow food as an act of healing, of love. And let’s give peas a chance!

Trying to begin to understand how to gently turn our garden back in time without sacrificing its mature, elegant plantings has taken patience and sage advice from the wise.  We’re just at the beginning.  And since a garden is alive, this will be a forever-changing labour of love.

When the Europeans came to Vancouver Island there were these glorious Garry Oak meadows filled with purple-blue camas flowers, native white and speckled tiger lilies, yellow monkey flowers, woodland stars, nodding onions, pink sea blush and dozens of others plants native only to this eco-system, this precious patch of Madre Tierra, this glorious gift of Gaia.  Many of these flowers have a unique pollinator.  To the ignorant, these seemingly unused meadows were just land for the grabbing.  Our area was claimed by the Hudson’s Bay Company and turned into a cattle ranch.  Little did these Europeans care to know that the land was actually tended like gardens by the First Nations.  They would weed and sow the camas, then dig up the bulbs, cook them, eat them and trade them.  So although the land seemed rather uninhabited, it was actually carefully cultivated.  Whenever I step into a Garry Oak meadow, I feel peace and a sense of magic sparkling through the air.  One of my neighbours had burial site on their property.  That doesn’t surprise me; Garry Oak meadows are a place one would want to rest forever.  To re-become the soil in the circle of life.

Garry Oak Trees are living sculptures,  gnarled, twisted, mossy with lichens.   They abound in Victoria but mostly stand in lawns, not meadows any more   I met a lady whose parents had lived down the road.  She said that when they first came to Oak Bay, their backyard was a stunning  meadow of greens, blues and yellows.  Cool!  I said, “Id love to see it.”  Too late, they had long ago installed a lawn, daffodils certainly. Probably a rhodo or two, turning their garden into an English ideal of “garden”.

Some gnarled Garry Oak-ness. Especially when the trees lose their leaves, they are living sculptures

Piece by piece, the Garry Oak Ecosystems declined and now there are less than 10 Percent left.   A pamphlet of Wildflowers of the Garry Oak Ecosystems, states that these ecosystems are among the most endangered areas in Canada.  Learning about its history was crucial to understanding what to encourage in our garden, which has camas and white fawn lilies, licorice ferns and others.  Before understanding this, l had no idea what to weed.  I just knew that the mossy rocks had to be kept free of grass and the dandelions at bay.  Originally I was perplexed with the camas wondering what they were. Before they flowered, I supposed them to be strange blue-bells or weeds and initially took several of them out.  I fell in love with the white fawn lily (the sublimely beautiful flowers at the top of the blog) but wondered why I didn’t see more of them.  Why did most of the neighbours not have them?  Why weren’t they sold in garden stores next to roses and tulips?

Initially, I puzzled at each green shoot that came up through the soil and rocks.  Was I to leave it, weed it or seed it?  Slowly I started to recognize plants and gained some confidence. However, as time went on, I realized just how much of our garden wasn’t native.  Wanting to honour the heritage of this unique part of the world, I started to fret.  If one takes the principle of planting only native plants to the extreme, I would have to cut down beautiful Japanese maples and mature Rhodos, blooming azaleas and so on.  Thus, I was moderately apprehensive when I first sought the advice of Nancy Turner of just how far to go.  Nancy, The Wise Woman of the Seed, distinguished professor at UVic, knows more about BC’s plants than anyone since she assimilates knowledge of elders of different regions.  She gave me such reassuring advice that I giddily  proclaimed her the Godmother of my Garden.  You may wonder what this advice was.  Well, to give it some real weight, on it own separate line…

I breathed a huge operatic sigh of relief and sang a line of Handel’s Halleluja.  Fast forwarding, the ivy and scotch broom are gone.  The Daffodils (a poisonous plant) are being dug out bulb by bulb.  I’ve started to remove the cotoneaster, desert plants, English laurel.

A couple hours worth of Cotoneaster Removal on the pavement. It grows right into the rocks and takes up space and light I want to reserve for Native Plants of the Garry Oak Ecosystems

It’s quite an enjoyable task to remove a non-native plant one doesn’t love.  But it’s conversely a conundrum for the ones you do like.  Our garden teems with cyclamens that pop up in the fall and violets that are blooming now.  Although both are so pretty, I would rather plant and encourage the chocolate lily, orange honeysuckle and the hairy honeysuckle.  I think the hairy honeysuckle is a plant I need to have if only to say its name over and over and over again.  Nancy told me that I was lucky to have over 20 different species of Mosses and lichens growing on the rocks that I’ve been assiduously weeding the grass out of for the last 3+ years.  I was excited to identify native “field chickweed” 2 weeks ago.  Last year I didn’t know what it was and plucked it from the rocks with a satisfying wrench.    Now, knowing that it has a native pollinator, I would love that buzzing creature to find some nectar in our garden.

Before making an island to seed wildflowers 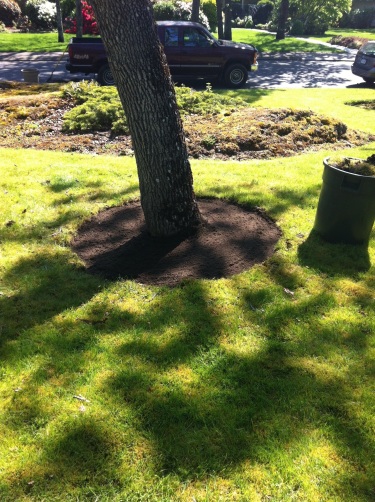 After making the island of soil to seed wild-flowers

It has been a slow start to change but now I’m pleased to share that I’ve gathered momentum born of understanding some history of the land and a nano-sliver of plant lore.  One might ask, if the garden was already so beautiful, why change it?  Our garden (even with the invasives) breathes, pulsates  delight due to decades of loving care by the previous keepers who bequeathed this glory to us.  When the Europeans settled in Vancouver Island they were trying to re-create their inherited notions of use, purpose and beauty which were tied to another ecosystem.  To their credit, they never imagined this once-wild land would be populated by humans to its current extent.  To them, changing a little piece here and there was harmless.  But, piece by piece, our wilderness and cultivated lands have become all staked out in parcels, the biodiversity replaced with houses and international, common garden plant varieties.  Genetic diversity is the root of our biological existence.  In every instance where people have cultivated too much of one type of any one thing (ie: GMO production, Irish potato famine), devastation occurs.

Biodiversity has been the key to our success as a species.  We rely on diversity as a modus operendus for life.  Our local climate and soils have evolved over thousands of years along with all the 5 main branches of the tree of life, bacteria: lichens, amoebas, plants and animals.  How we must honour and respect that.

Our ideals of gardens must be adapted so that we foster native ecosystems and value their unique diversity.  It’s kind of circular logic but undeniable: What makes our native ecosystem different is what makes it unique, special and indescribably beautiful.

Changing our garden, steering it forwards but also backwards towards its evolved purpose can only benefit each and every one of us.

Gearing up for Earth Day…. This is a Farmer’s Anthem.

My grandfather Rupert Stephens was a gentle soul with 2 passions, organic farming and writing songs. He also wrote about farming. Grandpa’s most beautiful songs are (arguably) those about the Earth. He wrote “This Earth is Mine’ in the 1950s.

Last year, on Vancouver Island where the song was born, I re-recorded ‘This Earth is Ours’ changing the lyric slightly. My dad Arran recited the second verse as indicated in a creased, fragile, old lyrics sheet found in some random book. It had been type-written by my grandmother the glamorous Gwendolyn who loved the feel of dirt in her hands.

I got in touch with the amazing guitarist Adam Dobres. We took up the tempo, gave it a Joan Baez ‘Silver Dagger’ – feel with full vocal vibrato and Adam playing a wicked folk-rendition on his guitar.

Grandpa Rupert passed away when I was a toddler. When my dad Arran announced the event of the birth of his granddaughter (ie: moi), Grandpa Rupert was delighted. But when they told him my name, he didn’t say anything.

He must have been at the origin of the Stephens’ refrain of “Before you speak, ask yourself first, ‘Is it kind? Is it true? Is it necessary?'” Grandpa Rupert really didn’t like my name.

Awww. Sniff. (I don’t blame him, it was a name that I found hard to wear growing up on the West side of Vancouver.)

A little afterwards, Grandpa Rupert told dad about a bird cooing outside his window. The bird was singing ‘G-Deep! G-Deep!’ And that did it. If the birds were singing my name, it was a sign. After that Grandpa Rupert loved my name.

I love him through his music and his earnest joy and romantic ideals of respect for the land and especially for the ‘lowly earthworm’.